Hi all.
As expected, 4000km after the first rear wheel bearing gone bad, the second followed.
This time however it happened in the middle of summer vacations.
Portugal is a difficult country for people like me. You see I work my ass off, and in return I get to buy most the stuff I want. In order to do so, I have to deliver 75% of my earnings to Taxation. Most Portuguese however live off state funding and get to spend my 75% taxes... and still argue that I drive a rich man's car ... odd at the minimum.
During this austerity times being lived all across Europe, and in particular, Portugal, while I worked across the summer, most took their vacations.
During my summer-at-work the bearing went bad. I ordered a new one from Honda Portugal, as having one sent from the states would cost the same because of stupid excessive taxation of imports. I placed the order and it took a full week to arrive. Why? Spanish truck-drivers were on strike and no parts stock is kept in Portugal for the S2000.
After getting the new bearing I arranged an in-a-day intervention like the last time. However the mechanic told-me the Lathe's craftsman was on vacation!
I finally got that scheduled to a Saturday (sacrificing my time-to-recover my sleep) a full month latter.
All that month driving the S2000 on a bad bearing is only describable as pure torture. 1st because the car is not meant to drive slow. 2nd because the S2000 has little or none acoustic shielding. You find your self being overtaken by old man at 50km/h. The worse comes after the heating up of the bearing and the squeal... constant squeal. After 1 km you tell the ATM pin to the car, speaking all by your self... and 2km into this you are ready to tell ho is you lover, how many laws you've ever broken, the drugs you've done and each and every other dark secret you may have... believe-me Opus and the Masons would want their car's allways on good bearings.
The month went by and by the end of it it stopped squealing and started popping. By that time you either stop or embrace for accident.
So everything was set and I was going to spend a full day in the garage but have the problem solved the same day. Saturday came... I got up 50% in pain for being that early and 50% in relieve as the squealing and popping was about to end.
I was 10% the way to the garage when I got a call from the mechanic saying : not today man! going for some vacation.
I was ready to start killing people.
I immediately turned around, and drive the car into my garage. I took the tool box out and the 2ton jack under the car... and hands on the job. And that's my way of doing things! If you are willing to pay for something you know how to do yourself, than you are doing it for the speed and comfort of service. If that's not happening...than screw them all and teach them a valuable lesson: vacation if good but you will not be making any money while sitting on the beach.

I also went to the business garage where me and my partner had some car's to sell and grab a Citroen C4 picasso to drive arround while this was being done (and this is a desperate measure as I hate diesels and particularly big ones).

So hands On... First part: dismantle everything:
with the car still on the ground, loosen the screw on the wheel and the centre hub. 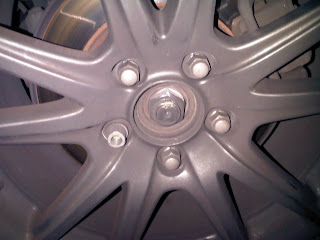 To do the centre hub you'll need to unlock-it by tapping the deformed part of the nut border using a hammer and a screw driver. 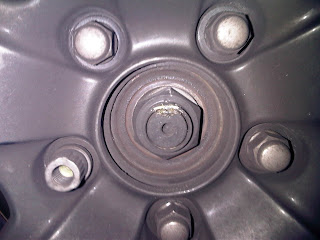 Then you can loosen-it just enough to be able to unscrew-it with the wheel off the ground. 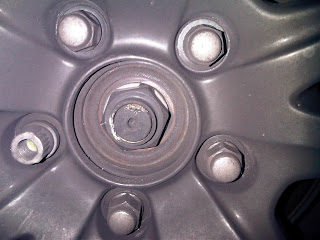 Then use the jack and lift the car off the ground. Remove the wheel. 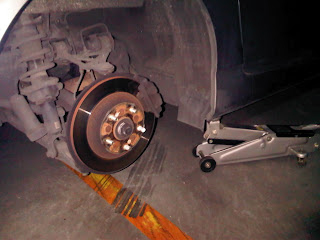 Then a good set of drivers to unscrew the brake calliper. 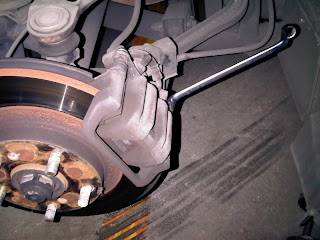 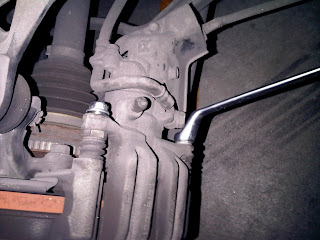 Remember to lock the nut with another driver like shown. 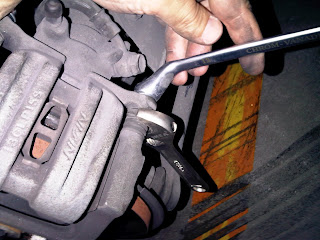 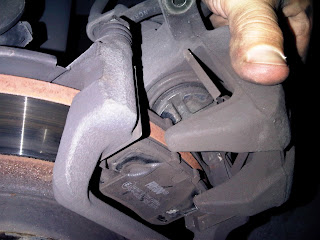 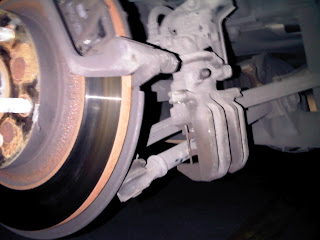 It's then time for the brake-pads and the brake calliper bracket. 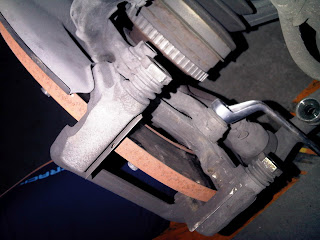 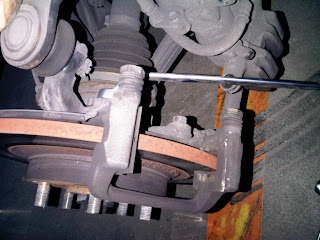 Then, gently remove the ABS sensor and place-it in a protected location (the upper triangle is perfect). 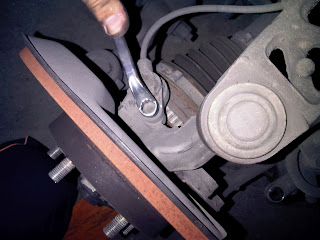 With a big screw-driver and a hammer, unscrew the rotor holder screws. They probably will be difficult to remove and failing to remove will damage the screws, SO use the hammer and hit the screw driver against the screws twice with some conviction, and you're done. 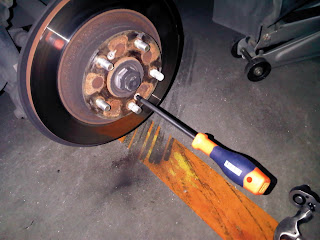 To remove the ball-joints, first unlock the nut by removing the locking pins. You'll find them in all three ball joints (upper triangle, lower arm and lower control arm). 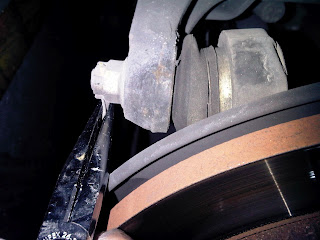 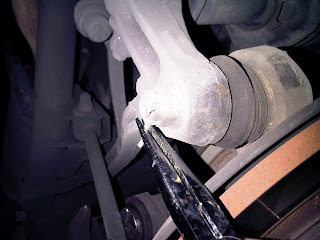 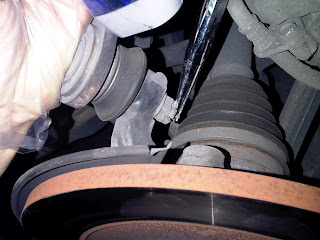 Unscrew the nuts from the ball joint. 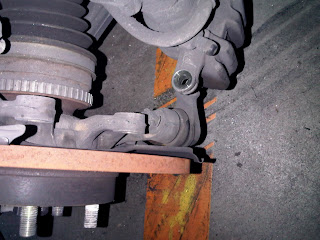 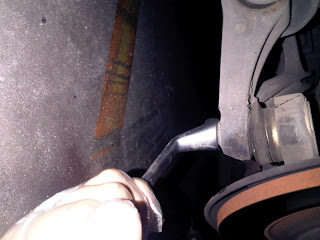 To remove the Ball-joints, most people use a ball-joint separator. However that is a conic assembly. I decided to drop some of the car's weight on a wood stick that set between the ground and the ball-joint screw on the rear lower arm. THEN I used a 1.5Kg sledge hammer and tapped it (gently being a 1.5kg one) twice on the hub body near the ball-joint screw. This will send a shock-wave through the metal, good enough to shake it loose, but not enough to damage.
Then the same for the rear control arm (but without the wood stick... this one comes out much more easily).

Then it's time to unscrew the hub nut.
To remove the semi-axle from the wheel centre hub, use a rubber sledge hammer and hammer it vigorously. Some people use metal ones and do it gently... I honestly recommend the rubber ones.
This will both loose the semi-axle and the ball-joint from the upper triangle. 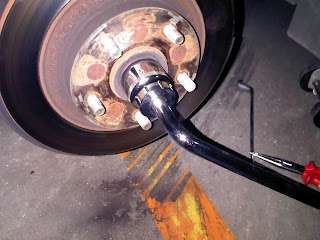 This is the end result. Time to use a metal brush and do a little metal maintenance work on that rust while you sent the hub to the lathe's smith. 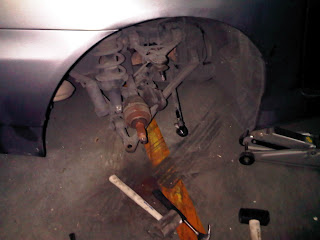 On the picture you can see the old hammer with the wodden stick I used "hurt" by the ball-joint screw, the rubber sledge hammer, the small metal hammer and the 1,5kg sledge hammer. Plus the hub assembly ready to go to the lathes shop and the break disk. 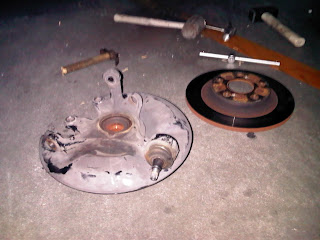 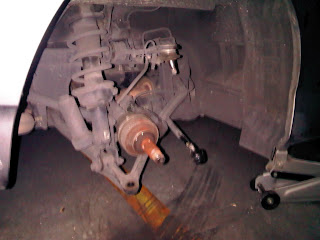 Send THIS to the lathe shop: 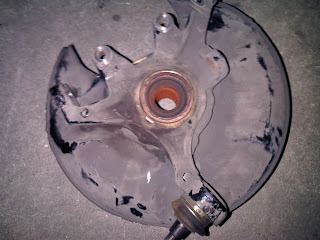 The final assembly should look exactly like this. Since bearings are directional, the black ring must be visible. 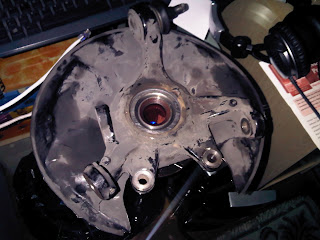 Re-install everything and tighten everything according to Honda's manual torque specs. EXCEPT the big HUB nut.
Honda issued a call-back (ignored by most dealers) to change the tightening torque from 185nm to over 298nm...but never ever less than 245nm.
Failing to do that will kill the bearings sooner, and if you have after-market wheels with different offsets, it will happen even sooner. 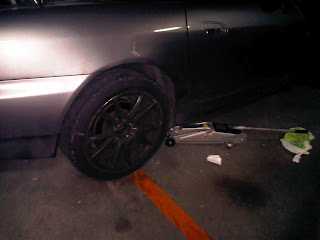